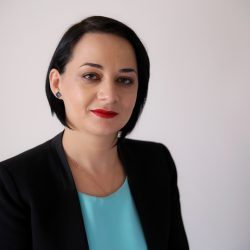 Fitore Pacolli Dalipi has completed her MSc in Politics and Government of the European Union from the London School of Economics and Political Sciences (LSE) in London. She also holds two bachelor degrees a BA (Hons) Politics and International Relations from the London Metropolitan University in London and a BA in English Language and Literature from the University of Prishtina. While in London, she was engaged as a researcher at International Business and Diplomatic Exchange and she also got engaged with the 2010 general elections in the UK. She was voluntarily involved in the activities of the Amnesty International in London. Since 2012, she has been an activist at the Movement for Self-Determination, where she leads the Committee on Foreign Affairs. From 2012 to 2015, she worked as a lecturer at “Universum College” at the department of Administration and Political Sciences. She has eight years of teaching experience in local and international schools.